Grab all the details regarding Alana Thompson/ Honey Boo Boo’s weight loss tale and her struggle amidst the body-shaming response!

Folks went gaga over June Shannon when she transformed into a complete bombshell after shedding down 300 pounds. As the obesity runs in the Shannon family, Mama June doesn’t want her daughters to be the haunt of weighing at their heaviest. So far, ‘Here Comes Honey Boo Boo,’ Alana Thompson’s weight loss transformation hasn’t coincided well with the folks.

Alana Thompson debuted from the TV show named ‘Toddlers & Tiaras’, where she acquired a moniker, Honey Boo Boo, following the taunt at the fellow contestant. Then, she accompanied the new reality show ‘Here Comes Honey Boo Boo,’ which continued her adventures alongside the Thompson family. Though the overweight Alana has finally trimmed down to good shape, peeps are unstoppable to pass on body-shaming comments at the teen.

Three years ago, she followed the footsteps of Mama June so that she could lead a healthy lifestyle in forthcoming days. After all, June Shannon, who lost 300 pounds, came off as on inspiration for 12 years old, Honey Boo Boo. Initially, Alana cut off grease and soda from her diet. For any weight loss program, the processed foods and drinks are excluded from the diet routines.

Alone from the healthy snacks, Alana sheds down five pounds within a month. Also, she involved actively in outdoors and physical activities that melted away the excess fat.

Mama June’s sole aim was primarily spent on leading a healthy lifestyle instead of changing how one’s body looks. She didn’t intend her little girl, Honey Boo Boo, to face-off the same reality which she endured in her early days. At the same time, the teen TV personality opted to stay gracious and positive through her weight-loss tactics despite the hateful response.

Gets Body-Shamed Despite Weight Loss

On the contrary, peeps are being extremely intolerable to relatively slimmer and thinner Alana. Well, the internet is a scary place where even teens get through a body-shamming commentary without any choice. Howbeit, she is gleeful at her progress via greasy and soda cut escorted by sweaty workouts. Regardless of body-shaming statements, she didn’t halt sharing pictures of Boom Bod promos and smiling snaps with her mates.

Once, she uploaded a picture of her sitting astride a massive ball at Dave and Buster’s. She appeared comparatively leaner at the waist side. Most of all, she was in all smiles while posing with her companions. Yet, she had to get hold of body-shaming responses from the folks.

“You’re almost as round as that ball (sic).”

Isn’t that mean? Somehow, fans of Alana slammed back at the haters stating that they had no right to pass on body-shaming comments at all.

“you and [other users] should be ashamed. obviously [another user] is a child. but obviously their parents aren’t raising them right but neither of you has any right to body shame a young woman….and [other users] I would say you look round yourself but I won’t since you’re a child.

Plus, another fan came in support saying:

“You feel better about yourself after commenting on others bodies?”

Thankfully, Alana, aka Honey Boo Boo, owns a tribe of supporting fans too.

Similarly, Alana’s Sister, Lauryn Michelle “Pumpkin,” Shannon is in the pursuit of reducing the obesity epidemic in the family. Henceforth she took promos of the Boom Bod Weight Loss Shot Drink on the Instagram feeds only to acquire backlash on return. Since the product isn’t medically approved, people accused Pumpkin of swindling her fans from the weight loss product, the Boom Bod Weight Loss Shot Drink. 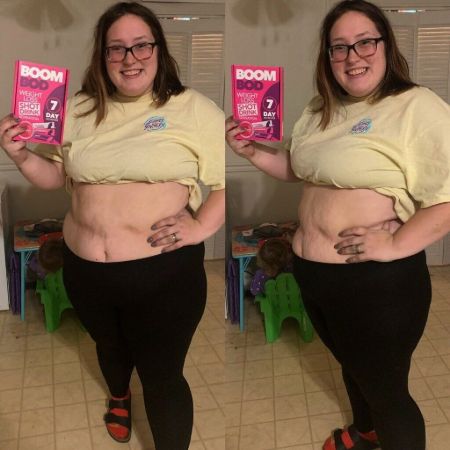 On social media posts, she promised that the drink reduces one’s bloating and appetitive. Additionally, she shared pictures of her stomach in the past few months to showcase the weight loss progress. But most of the peeps aren’t glad to see the product devoid of medical consent. Hence, they are against the diet product lacking medical approval as well as tests.