It’s no secret that Ari Fletcher’s body has been the topic of conversation for many. People in these digital streets always wonder if her breasts are real. Are they?

Ari Fletcher, whose real name is Ariana Fletcher, is a young model and entrepreneur. The Instagram influencer is also the co-founder of the KYCHE Extensions hair company.

Who is Ari Fletcher?

Fletcher started getting the attention of the public when she started dating rapper G Herbo in 2015. The two welcomed a son together, named Yosohn. They separated in 2018 when accusations came out about rapper cheating on Fletcher before and after the birth of their son.

Here is everything you need to know about Ari Flethcer’s plastic surgery procedures.

In September 2020, the girlfriend of rapper Moneybagg Yo announced that she got new plastic surgery.

Fletcher revealed that she opted for the surgery to make her breasts even as they were uneven before. As said by her, she got a breast lift and a permanent bra inside her chest. 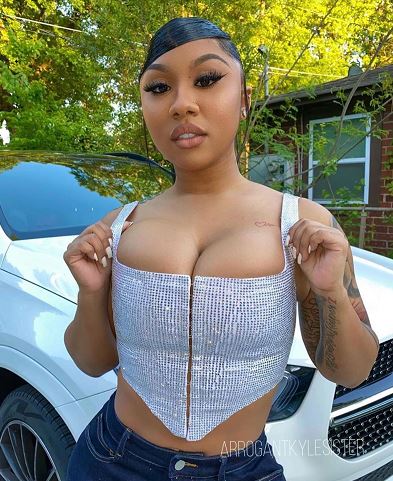 Fletcher, who has a child with Chicago rapper G Herbo, spoke candidly about the procedure, called Orbix Breast Supporting System, on Instagram live, adding the surgery caused the worst pain she’d been in, out of all procedures she has had done.

Fletcher explained to her fans why she got the surgery, saying:

“I had to get a revision done, and I got them like, closer together.  And I got a lift, and I got a permanent bra inside my chest.  That’s why it hurts so bad.”

The purpose of permanent bra surgery is to manage the position of the implants and to offer structural support. It aids in the reduction of drooping breast implants.

In August 2019, a medical page on Instagram claimed Fletcher had flown to Colombia for a full-body makeover surgery. According to the post, the model bought a new body from Dr. Hector Plazas, a Colombian plastic surgeon known for butt surgeries and tummy tucks.

A week later, Fletcher accidentally revealed her surgery enhancements while trying on jeans for a review. Her fans noticed her butt fold strangely into the jeans as she squeezed into them.

Ari Fletcher Encourages Her Fans To Get Plastic Surgery

The mother of one has always been vocal about the surgeries she’s had in the past. In May 2020, she encouraged her fans to buy the body they want through plastic surgery, saying:

“It’s 2020 get you some surgery sis, don’t let these people discourage you. BUY THE BODY YOU WANT!!!”

In response to Fletcher’s encouragement, a follower tweeted:

“You admitting to yours now?”

“I NEVER said I didn’t have surgery. I said my a** is real. And I’m going for new titties again as soon as they open.”

She also told that no fat has been transferred to her butt and urged people not to be jealous. She said:

“Y’all be so tight. Ain’t no fat transferred back here. Stop being jealous, that’s so ugly.”

Fletcher gained popularity when she dated rapper GHerbo with whom she has a son. She is now in a relationship with rapper MoneyBagg Yo.